This modern English version is, I hope, going to read like a modern English text. My own English may be a little odd because I’m bilingual (English/French), my English isn’t English (Scottish, Irish, Northern Irish), and I grew up abroad (Belgium). But the resulting text should, if I’ve done it properly, read more or less like English, with as little interference as possible from the intermediate translation and without looking artificially antiquated.

One of the best and shortest discussions of translation, by active practitioners, is by Frances Freeman Paden and William D. Paden in their preface to their collection Troubadour Poems from the South of France (Cambridge: Boydell & Brewer, 2007): viii-x.

Here is the Limoges casket to which they refer (British Museum): 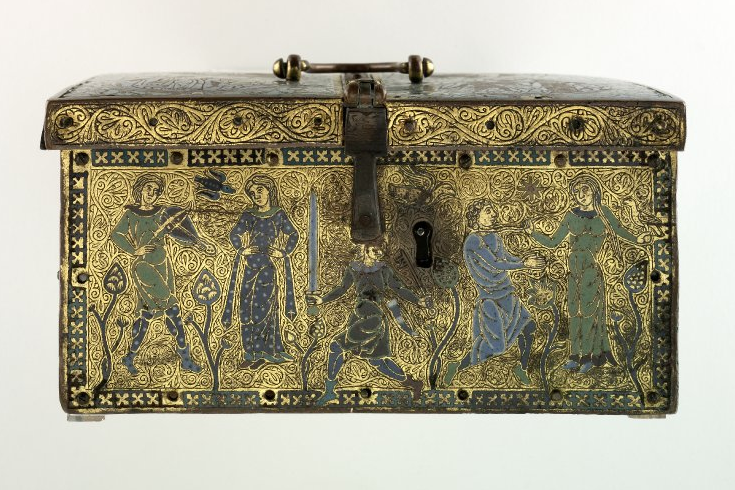 “On the casket the bird’s flight is circular; at the end of the story it is poised for flight, signaling that the narrative may begin again.”

“She wrapped the little bird in a piece of samite, embroidered in gold and covered in designs. […] He had a small vessel prepared, not of iron or steel, but of pure gold with fine stones, very precious and valuable. On it he carefully placed a lid and put the nightingale in it. Then he had the casket sealed and carried it with him at all times.”
—Glyn S. Burgess and Keith Busby translation (London: Penguin, 1986).

Like in the contemporary late 12th-century Anglo-Norman analogue above, we have a bird that is messenger and message and that metamorphoses along the way; and perhaps afterwards too, who knows what our casket that’s now in the British Museum originally contained: a bird enshrouded in fine silk on which a story had been embroidered (in words, in images, literally and literarily, or figuratively and allusively) in gold? Translation is that magic of metamorphosis which no-one should see in live action (and live, or live unchanged and unpunished, if Ovid’s Metamorphoses are any guide); and while what it makes should feel like a complete finished smooth work in and of itself, it would be a hubristic conceit to conceive of that as a new work; it is at best a renovation and an innovation, and inescapably haunted by ghosts of all intermediate versions. 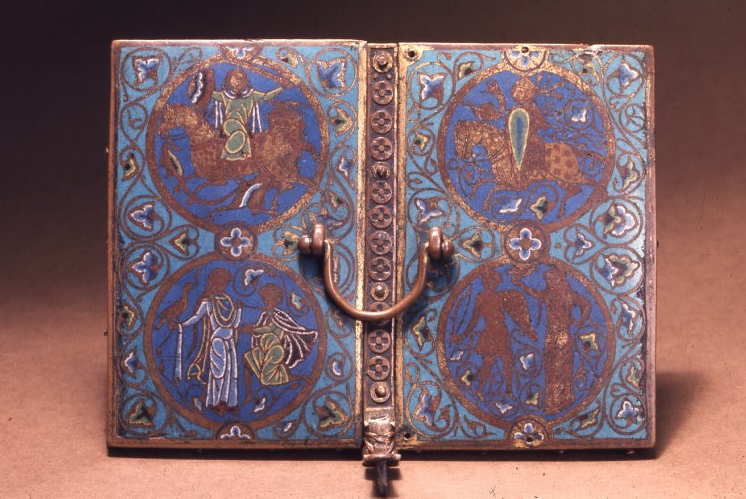 Repeating decorative motifs weave the casket together as an aesthetic whole while guiding its reading, including its use as a functional object: lines and interlace, vegetation, rosettes, quatrefoils, borders, strapwork and straps, hinges. Birds reappear and seem to change shape and kind, from bird of prey to song-bird, and to shape-shift by way of the entangling vegetation; turning into flowers, into increasingly abstracted shapes and simplified lines, curving their way around the casket, and making their way into anyone who touches them.

Our ghost doesn’t accept death or silence, and refuses to be reduced to a crumbling corpse and then to nothingness.

“There has been considerable discussion about the identity and purpose of the mysterious black figure on the front of the casket.”

Once upon a time, there was a bird who died.

He’d had a rich exciting life, but it all seemed like a distant foggy dream from which he was waking up. Every moment in this new existence was full of change as he saw parts of himself dessicate, peel away, and reveal new structures and selves underneath that he had had no idea were there. Freed from the distracting obligations of his old life, he could focus on the ever-evolving wonder that was himself.

And so he crumbled away into dust.

One day, his world went dark and he felt a rhythmical shaking. It reminded him of his singing days long ago. He tried to join in, but he didn’t have a voice any more so he had to invent something that felt like it. Dancing! When the light reappeared, he assembled his motes into a murmuration and danced towards it. That is how he found the lock, and a way to find out what was outside and around him; with the added delight of battling a dread jealous guardian every time. He still also enjoyed relaxing quietly in his resting-place, and so he would come and go, leaving some of his dark dustiness around the lock on his way back, stuck to the oiliness left by human hands when they unlocked his casket.

Sometimes a lucky thumb, fumbling to find the lock, gets smudged with some of his dust.